Feature comparison against other manufacturer of ECUs

This is a comparison of the major differences (most important to the end customer) of well known or well respected ECUs. Other features are not compared since that is not the whole point of the comparison. If any other ECUs are not on the list, it means I am not familiar with them (eg: AEM, e-manage) or there are no useful comparisons (eg: Apexi and Microtech).

If there are any mistakes or further feature comparisons to be made, please send corrections via the feedback form or email address.

*1 - additional cost involved.
*2 - dealer network only.
*3 - not required to be done by manufacturer, only used for cost comparison purposes.
*4 - reset/overwrite can be performed by user.

One of the biggest technical design problems with the F-CON V is that it is not a true standalone (non-piggyback) ECU. It:
• DOES NOT have software-controlled pull-up resistors for cam/crank sensors, required for optical-type. 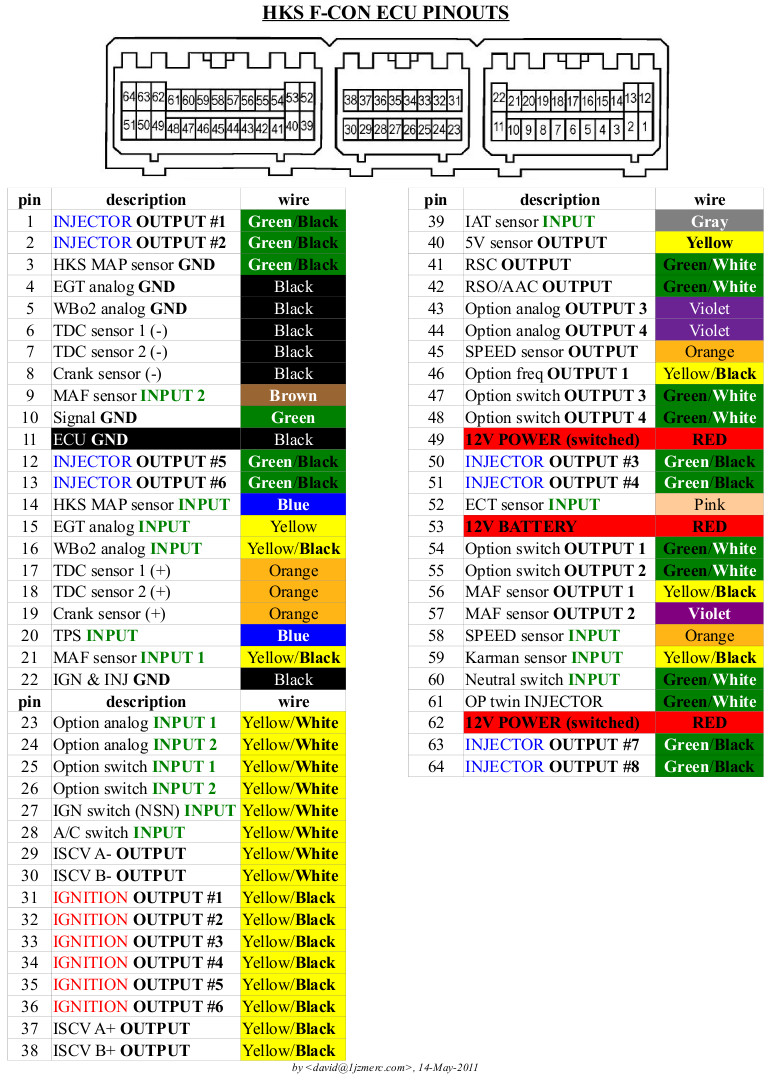 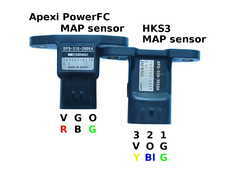 Various different make and model sensors can be used with HKS F-CON ECUs.

It is possible to calculate the PIM equation if you do not have the specifications of the MAP sensor (eg: C1 chinese-designed MAP sensor). In my case, I've used a blitz boost controller and Apexi PowerFC to measure such values. Why the PowerFC you may ask? Because the MAP sensor can be connected up for reading purposes only. Alternatively, you can connect pin O (signal) and pin G (ground) to a multimeter, although the external boost controller is still required for reference measurement. 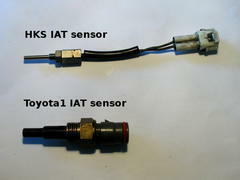 List of injectors with injector lag (dead time) in milli-seconds, from official sources (HKS or Apexi)

JECS produces injectors for well-known aftermarket brands like Nismo, HKS, Tomei and Apexi and can be considered equivalent:

Even though HKS sources injectors from JECS, HKS do modifications to the injectors to improve overall performance / characteristics.

Denso injectors are also produced for SARD and Blitz.

Any information from injector-rehab (or based on such) is INCORRECT for high impedance setups.

Each engine and intake manifold design (including where the injectors are located) have a preferred injection timing firing angle (BTDC) as to have the most consistent air/fuel mixture. Injection timing angle is more important the bigger the injector you utilise (eg: 2000cc on 2.0L engine).

For vvti applications, the 3D table (instead of 2D) would need to also take into account intake valve opening, which will be variable depending on engine load and engine RPM.

Conversion between dwell time (msec) and dwell angle can be made:
It is unknown whether VQ35DE* dwell time is correct, as HKS does not use this as part of engine default.

It is advised that for engines (Nissan VQ38*, VQ35DE*, VQ25DET, and Mitsubishi 4B11) with unknown dwell times (Ignition Control => Main Close Angle Time) TO BE determined before tuning.

Dwell time can be indirectly determined (measured) with a digital multimeter in duty-cycle mode with OEM-only ECU connected. One of the ignitor wires will need to be temporarily extended to connect (tap-in) with the multimeter. Measure duty-cycle at 1000 RPM intervals, from 1000 RPM to 7000 RPM.

One sometimes forgotten aspect of modifying engines is choosing the right spark plug. Choosing the wrong spark plug may cause misfire under high boost, or failure due to wrong temperature selection of the plugs.

Also be aware that buying via ebay, you may obtain counterfeit variants of genuine namebrand spark plugs. (eg: NGK here and here, Denso here) If it's too cheap to be true, then it is most certainly fake. 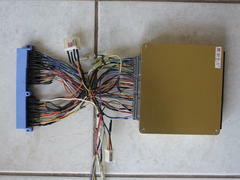 David has created a custom-made direct-connection harness for the Nissan Skyline R33 RB25DET without utilising the OEM ECU in the mix, whilst retaining the AFM (which means no MAP or IAT sensor!). In other words, the HKS F-CON V Pro ECU is the only ECU connected, also controlling fuel pump, NVCS and idle solenoid. It was not an easy process to make work as it requires understanding which wires are needed, and which wires go where onto the HKS ECU. 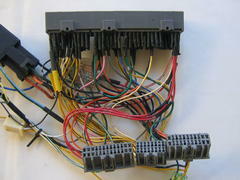 David has created a custom-made direct-connection harness for the Toyota (JZX90,JZZ30) 1JZ-GTE without utilising the OEM ECU in the mix, but at the same time, fully controlling ISCV. It was not an easy process to make work as even documentation on how to make the ECU control the ISCV was not 100% correct in terms of corner case behaviour.

Harnesses are interchangeable between ECU hardware, from the PRO version, to iS and SZ series.