Internal combustion (spark-ignition) engines as used in automotive purposes suffer - if ignition is advanced too far - from the phenomenon of "engine knocking", where the air/fuel mixture "explodes" irregularly outside of the normal combustion front.

The length of time for the mixture to combust depends on the following characteristics:
• in-cylinder pressure (engine load)
• intake air temperature.
• air/fuel ratio of mixture.
• octane level of the fuel, which also degrades over time (days and/or weeks).
• engine design.

Ideally fuel should be ignited so the maximum pressure peak occurs between 14 to 20 degrees ATDC, depending on the engine design (but independent of engine load and RPM). But at the same time air/fuel mixture within 12.0-12.5 AFR also results in quickest burn. Alternatively, richer mixtures result in slower burn, so it is best to tune fuel before ignition. Some people may advance ignition too much and use fuel to counteract "knock", which is never a good approach. 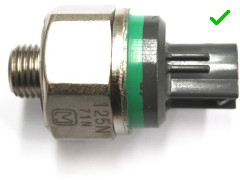 Resonant knock sensors are "tuned" to a specific knock frequency which is primarily determined by the cylinder diameter. It can be said that a band-pass filter is built into the sensor, rather than in the electronics as is done by flat-response knock sensor implementation.

From a frequency-analysis point of view, there is close to zero difference from the point of view of knock defender, apart from different gain amplification requirements.

Why there are two different type of sensors in the first place... this is because it was easier to design analog electronics back in the 1970s / 1980s, and some manufacturers decided to retain this sensor on engines up until 2005 (eg: mitsubishi evo IX has the older designed sensor, while evo X has the newer designed sensor).

Knock Defender will support all aftermarket ECU that use active-low knock window signal.

It is NOT supported on:
• Apexi PowerFC.
• Haltech (Knock Ears does not support knock window INPUT).
• Wolf3D (same, they recommend Knock Ears).

If you know any other ECUs (make and model) that support (or do NOT support) knock window signal, let me know so it can be added to the list.